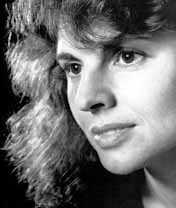 Seven fragments from ‘Edith’
A setting of fragments from the cycle of poems, Edith, Flambard Press, for soprano, flute (picc. + alto flute), clarinet in A, 2 violins, cello & double bass.
‘The fragments selected for this setting focus on Edith’s carefully hidden past and her last days in a nursing home. Submerged in an atmosphere where care and institutional violence mix… These fragments are often isolated verses or phrases, their larger context being somehow adumbrated by the music.’

A composition for mezzo-soprano and piano trio, it was first performed by Jane Manning on Valentine’s Day in Kings College, London.

‘A Love Song for Psyche & Cupid’

Venus had stabbed
the puffed thin skin of her young love,
burnt it black like potatoes
sighed and deflated.

Left alone
on the top storey
of Mortlock Court,
Wyn Boiling had come
into the old folks’ home
to share the warmth of bed pans
and perimeters of walking frames.

By day, she sat
in the silent laager of chairs,
wedged bag on her lap,
long beige stockinged legs
slanted sidewards like a deer
hiding in the scar
of grey pollarded trees.

Then, as the red-fox light of evenings
stole over their gouted breathing night-shapes,
they were turned into an enchanted forest
of majestic trees.
She found herself in a beautiful palace
where a bird of brilliant plumage
spoke to her from its gilded cage.
Four cooks prepared her lavish meals.
In time a courtier would lead her to her bath.

At night, after they had been put to bed,
the god of love himself
would come again to her.
He stood before her door,
legs bent, slightly stooping over his stick,
his loose hand knocking lightly
against the door to her chamber –
his long drooped face
requesting an audience.

In the yellow night light,
by the call-button cord,
in the deep rift of the narrow bed,
they manoeuvred together.

Her fingers felt out the soft hollow of his stomach
with its raised moles and single tough hairs,
like sedges stalking out into a quiet fen.
On, down into the tangled thicket of bracken
catching her jewelled fingers in its strong roots,
prising free from its nest
a log, long lain in damp beech leaves;
digging him out from the crease of his old trousers.

They were wet as red mellow wood,
slimy as leather,
fruit rotted together on the forest floor.

She had become Venus herself,
fiercely in love with her old beauty
and her ripened fruit
she named Pleasure.

Thistles of the Hesperides, Flambard Press 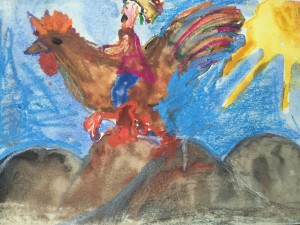 A piece for tenor, chamber choir and orchestra which received its world premier in a concert recorded by the BBC Singers and broadcast on Radio 3.
‘This narrative poem records the changing nature of Poland’s history in the 20th Century through the life of a Polish doctor.’
Silhouetted above the ancient capital of Poland is a sleeping soldier prince, turned into a mountain long ago. Tradition tells that he will wake to the sound of the castle bell in his country’s hour of need.

I am Bogumil L. Kmiec.
For one month every year I get drunk.
(So you’re sober the rest of the year?)
I stand in the doorway soliloquising to the night
in long white underpants with rubber buttons,
white bandages round my knees,
neck wider than my face,
stomach slung like a basket in front.
Moles grow over my back,
sheaves of barnacles
across my neck like slanted rain.

‘Bogumil shall sleep no more. The Nazis have
murdered his bed.’

In the fridge, the gun barrel
spouts of vodka bottles
stack like a watch-tower,
clear rimmed eyes darting
and bubbling in the bottles.
Diver after diver
he chases down his funnelled throat
burning sharp as glass.
He turns on the television
and watches, soundless.
It is more trustworthy
to invent his own words.

I am Bogumil, a doctor with no medicines!
I swap twelve hours of my life for ten litres of petrol.
I retreat from the city when the carpet beaters
smack like rifle fire in the gullies
surrounding my block.
And I weep for grease drops
hanging under the grill mesh
like beads of mist on a cobweb –
mementoes of burnt flesh.

He apostrophises to his drunken bed.

‘Will you be as you were last night,
or as you are every night in my memory?
What is past, when it’s more real than now?
Will your rucks and landscape be soft and padded
or ridges of slatted wood?
Will I toss against pillows
that are hard and white as crops of ice
where mattresses striped with barbed wire
and crowded pallets shake in my head?
My thoughts divide and cross to the end of that line.’

‘Bogumil, tricked once. A train is only a train sometimes.’

In the early hours sleep like a stain
creeps over him.
He lies across the door
like a fallen ogre,
his snoring shaking the house,
small between the guard of the Mountain Prince
ready to stir should Poland need
and the Great Wawel Bell.

Thistles of the Hesperides, Flambard Press